A classic science fiction masterpiece… with a Cthulhu Mythos twist. Published for the first time, this reportedly true version of Prendick’s adventure, recently unearthed by learned professors of Arkham’s Miskatonic University and authenticated as Wells’ original version of events, includes details that until now have remained missing: cosmic gods, alien horrors, and the dark machinations of the Cthulhu Mythos. For Moreau did not conduct his experiments alone.

His allies were the dreaded Mi-go, the Fungi from Yuggoth as recounted in H. P. Lovecraft’s “The Whisperer in Darkness”, and reveals this unknowable alien race from beyond the stars with a plan not only for animal alteration, but focused on the evolution of humanity itself…

A plan still in action today…

Posted by David Conyers at 4:54 pm No comments: 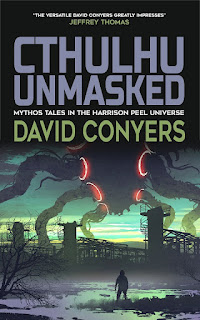 My latest Cthulhu Mythos short story collection is out and available on Amazon and Kobo, CTHULHU UNMASKED.

These stories while set in the Harrison Peel universe (and the wider Cthulhu Mythos universe) don’t feature Peel himself, but include several characters, Outer Gods, tomes, locations and cults that also appear in the main Peel series.

These tales are reprints, but I’ve gone back and revised and edited them all.

Stories include “Sister of the Sands”, “The Swelling”, “From the Sick Trees”, “The Faceless Watchers”, “As Above So Below”, “Winds of Nzambi” with David Kernot, “Sweet as Decay” with David Witteveen, “A Shared Romance”, “Solvent Hunger”, “Vanishing Curves”, “Screaming Crawler”, “The Eldritch Force” with Peter Rawlik, Glynn Owen Barrass, Brian M. Sammons, Bruce L. Priddy, Robert M. Price and Rick Lai, “The Dream Quest of a Thousand Cats” and “Outside Looking In.”

Posted by David Conyers at 7:51 am No comments:

CTHULHU RELOADED out now, in PAPERBACK and EBOOK 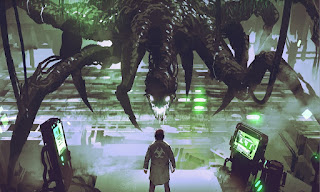 Well, I've been blown away by how quickly CTHULHU RELOADED has been selling since its release today, both in paperback and eBook format.

So if you like a mix of espionage and military action, weird science fiction, and Lovecraftian nightmarish and alien gods, check it out...

And if you enjoyed it, please post a review too. Reviews go a long way toward helping authors like me promote the book to other readers who might enjoy it.

Thank you everyone for your support in finally getting a complete Harrison Peel series out there in print.

Posted by David Conyers at 9:13 pm No comments: 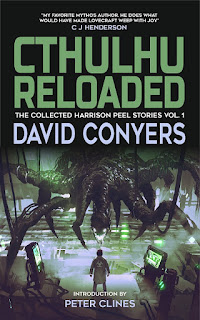 For fans of weird science fiction, Delta Green and Charles Stross’s The Laundry, the Harrison Peel series is a collection of interconnected cosmic horror stories that explore the world, and the entire universe, of H. P. Lovecraft’s Cthulhu Mythos, stretched across all space and time.

This original story sees Peel consult on a murder investigation in Los Angeles. When an actress disappears on a film set, clues lead a screenplay based on the legendary play, The King in Yellow. Then a bizarre reality creeps into Peel’s existence, and the shores of Lake Hali on distant Carcosa beckon…

Posted by David Conyers at 2:53 pm No comments:

I have two new Harrison Peel books out now at Amazon (Kindle) and Smashwords (ePub).

The Elder Codex — When ripples in the fabric of space-time warp reality in Somilia, Peel investigates, and retraces his past in the ruins of devastated land.

The Spiraling Worm (with John Sunseri) — A missing US soldier resurfaces in the jungles of the Democratic Republic of Congo, mutilated and deformed, and commanding an army of cultists soldiers on a war path against Peel and a small contingent of special forces soldiers.

The fourth collection features two short stories and one novella set against the backdrop of the War on Terror, the Space Program and radio astronomy.

The Road to Afghanistan — Peel contacts an assassin embroiled in a conspiracy festering at the very heart of the Pentagon, one involving alien creatures pulled from another dimension and released into Taliban controlled territory.

War Gods of Men (with David Kernot) — in Afghanistan a new super-weapon is decimating soldiers on the battlefronts, so Peel teams up with cyber-analyst Sergeant Emerson Ash and leads a search and destroy mission inside the enemy heartland.

The Eye of Infinity — an astrophysicist is found dead at a radio telescope facility in New Mexico with a condition called multiple eye syndrome, and Peel’s investigation leads him to NASA and a conspiracy at the heart of the very universe itself.

See the Harrison Peel page for details where these books can be purchased. If you want a review copy, please email me.

Posted by David Conyers at 9:10 am No comments:

I’m appearing in a new anthology out later in the year, Tides of Possibility, formulated from the idea that the rise of the indie author is upon us, that many of those authors write science fiction. This is an anthology to celebrate the success of the new form of 21st Century SF writer, and I’m glad to be a part of it. A science fiction anthology from the rising stars of indie-publishing in Texas and beyond, edited by K.J. Russell with cover art by David Sidebotham. This is a description of my story: “Downsizing in the Technopoly”, is an intimate look at the tragedy inflicted on one man's life when the coming of generous extra-terrestrials upends the global economy of the planet Jharkhand. One of millions suddenly unemployed, Yusuf McCredie finds no comfort in the utopian technologies meant to uplift his species. He is a corporate man, and if he cannot manage others, how can he be happy? The only intellect that understands his plight — an extra-terrestrial being calling itself a Skin Hitcher — has a proposition for him: "You want to become the biomass/intellect contribution to my micro-farm/eco-genesis?"

Here is a list of many of the authors and stories I’ll be appearing along side in the anthology:

Posted by David Conyers at 10:16 pm No comments:

The sheer variety of exoplanets is making us rethink science fiction. The variety of alien terrains that heroic space adventurers will now be subjected to is likely to be more bizarre than anything we’ve yet encountered, or at least that is what David Kernot and I think.

Therefore, in celebration of the recent release of our book Extreme Planets, the first anthology of exoplanet tales featuring carbon planets, water worlds, super-Earths and lava planets, we would like to draw your attention to eight classic SF novels that feature some of the strange worlds ever imagined.

Check out our guest post on SF Signal.
Posted by David Conyers at 9:58 pm No comments:

David Conyers
Adelaide, South Australia, Australia
David Conyers is an Australian science fiction author residing in Adelaide. His fiction has appeared in Jupiter, Book of Dark Wisdom, Midnight Echo, Antipodean SF, and Andromeda Spaceways as well as a dozen anthologies published world wide including ‘best of’ collections. He is the co-author of the novel The Spiraling Worm with John Sunseri and editor of the horror anthology Cthulhu’s Dark Cults, both published in the United States. David has been a multiple nominee for the Aurealis, Australian Shadows and Ditmar Awards. He won the Australian Horror Writers Association’s Flash Fiction Award in 2007 and was shortlisted for the Aeon Award in the same year. He recently joined Albedo One, Ireland’s magazine of speculative fiction, as a regular reviewer and is currently editing Cthulhu Unbound 3 with Brian M. Sammons for Permuted Press.